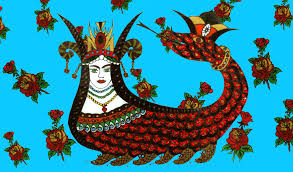 There is a story we love to listen to when we are young. Sahmeran is a kind of life with goodness. He lives with his snakes underground. All snakes obey him. A young man named Jemshab is left in the bottom of the well in order not to share the beans he found because of his friends' greed. Jemshab, who is alone here and can not go up, sees a hole on the side of the well. He enlarges the hole, observes the leaky part of the hole and sees the Şahmeranı there. Then he digs as much as he can and he meets Shahmeran this way. Şahmeran Cemşabı likes very much. While Jemshab is staying with Şahmeran, Şahmeran gives him information that no human related to medical science has. Jemshab also makes his hand to learn this information. According to a rumor, Jemshab is actually known as the Lokman Physician.


After a long time passing, Jemshab is bored and wants to go home. Şahmeran asks you not to go; but Jemshab will allow you to leave because he is determined on this issue. Jamshaban takes word when he goes that he should not tell anyone that he saw him. Jemshab does not tell anyone you saw the Shah after he returned home. But the ruler of the time gets sick and the only cure for his illness is in the body of Şahmeran. The vizier, who thinks to heal the ward by cutting off the wardrobe and feeding the flesh of the flesh, calls the Şahmeranı everywhere. He controls all the people in the country one by one. There is a way of doing it yourself. It attracts all people to the workmanship and follows people who are secretly washed from a corner. Although Jemshab is determined not to tell the location of Şahmeran, vizier Jemşabi also calls the hottub. Hiding in a corner, he watches the Cemagu. The vizier suddenly emerges, seeing that the Jemshabin body is covered with scales, to undress there. The vizier Cemşabı, who knows that the body of the person who sees the witness will be covered with scales, forces him to speak. On this, Jemshab will have to say the location of Şahmeran if he does not want to. In this way, it succeeds to capture the vizier Şahmeran who learns the location of Şahmeran.

The captured Şahmeran gets to know how sorry Jemshab is. He understands that he did not do it willingly. Sahmeran desperately will die but wants to meet Jemshab before he dies. When Jemshaba kills him, he tells them to boil their meat and drink water and a veil, and to eat meat as a ruler. It is exactly what Jemshab Sahmeran said. The water is given to the veil. The vizier will die on the spot. He takes the meat as a rule and heals the sultan.
The Sahmans myth is a lesson for people about doing good and finding evil, and generations come with stories.

According to the legend, Şahmera's snakes do not know that Şahmera is still dead. If the snakes find out that Sahmeran is dead, they will take the whole city and take revenge of Şahmeran. But in my opinion, Sahmeran is peaceful and kind. The snakes are said to have resorted to a set of tricks so that you do not harm people, you do not understand that you are dead.
english